Wyoming became the 44th state to enter the union on July 10, 1890. The land that comprised what is now Wyoming was bought from France as part of the Louisiana Purchase in 1803. No wonder the state’s slogan is “Like no place on Earth”—Wyoming is 98,000 square miles of natural beauty and splendor. The Equality State is the least populous of all the 50 states with only 578,000 residents. But what Wyoming lacks in population, it more than makes up for in some of the best attractions in the country. Here are 5 you’ve got to see on your next visit to Wyoming.

Established in 1872, Yellowstone is the world’s first and oldest national park. It encompasses some 3,500 square miles of wilderness atop a volcanic hot spot. Here, bison roam the land freely, and other wildlife are plentiful, including bears, grey wolves, bald eagles, elk and more. But the animals that inhabit Yellowstone are just the beginning of all there is to experience at this vast national park. Yellowstone is home to a myriad of breathtaking waterfalls, pristine lakes, rushing rivers, hot springs and geysers. Old Faithful—the park’s most famous geyser—has become somewhat of an icon of Yellowstone. It “faithfully” erupts up to 17 times per day, and though it’s not on a specific time table, its eruptions can be predicted about 90% of the time!

In the winter, skiing and snowshoeing are popular among visitors. During the spring and summer, campers make their way to Yellowstone to enjoy the natural beauty and splendor of the world around them. Hiking trails are plentiful, as are photographic opportunities, thanks to the unique landscape, beautiful foliage and endless skies that delight visitors to the park. To learn more about Yellowstone or to begin planning your visit, go to www.nps.gov/yell.

Devils Tower National Monument is located in Crook County, Wyoming in the Bear Lodge Mountains. On September 24, 1906, it was the first national monument ever established in the United States. Devils Tower itself—also called Bear Lodge Butte—is classified as a laccolithic butte, which describes how layers of sedimentary rock permeate the formation. It rises nearly 1,300 feet above the Belle Fourche River and stands 867 feet from its base to the summit.

You may recognize Devils Tower from the 1977 film Close Encounters of the Third Kind, in which it was used as a plot element, as well as the location of the climactic scenes in the film. (The film’s release was responsible for an influx of visitors to the national monument.)

More than 400,000 people visit Devils Tower every year. They come to view the formation and to enjoy the landscape, wildlife and hiking trails. Animals like prairie dogs, squirrels, deer, shrews, rabbits, weasels, black bears, bats, raccoons, and others make their home here, and the monument boasts more than 160 species of birds. “The Park After Dark” program encourages visitors to come see Devils Tower after the sun sets. Light from stars and other objects from deep space illuminate the park. On some nights, you can even see the Milky Way shining over the tower. For more information about this national monument, visit www.nps.gov/deto.

Buffalo Bill Center of the West

Born in February of 1846, William F. Cody became a legend in his own time. He was a rider for the Pony Express at just 15 years old. During the Civil War, he served in the Union Army from 1863 until the war was over, and during the Indian Wars, he was a civilian scout. In 1872, he received the Medal of Honor. William F. Cody was also known as Buffalo Bill.

The Buffalo Bill Center of the West in Cody, Wyoming, includes five different museums. The Buffalo Bill Museum is dedicated to the memory of the legendary man and to the American West. The Draper Museum’s exhibits take a look at the natural beauty and animals that are a part of the Greater Yellowstone Region. At the Whitney Western Museum, there are numerous pieces of art that depict and celebrate the life and times of the American West. The Plains Museum promotes understanding and public recognition of the importance of Plains Indian art. Visitors can learn about the art and the artists behind the works. The Cody Firearms Museum features guns and other firearms used in the American West. The newly-remodeled museum will open in Summer 2019.

General admission tickets allow access to all five museums over 2 consecutive days. Cost is $19 for adults, $18 for seniors, $17.50 for students with I.D. and $12.50 for youth ages 6 to 17. To learn more about the Buffalo Bill Center, visit www.centerofthewest.org.

Jackson Hole Mountain Resort lies at the gateway to the Grand Teton National Park in Teton Village, Wyoming. An average of 450 inches of snow falls on the mountains of Jackson Hole every winter, making it the perfect place to ski in the winter and spring months. But there’s more than just skiing at Jackson Hole. Each year, the resort hosts the Rendezvous Spring Festival—a 3-day-long musical event. The “Music Under the Tram” series is also very popular with visitors after the snow melts. Visitors also enjoy wildlife safaris, and the National Elk Refuge is a favorite attraction as well. It’s home to more than 60 species of mammals, more than 100 species of birds and six different kinds of game fish.

Visitors to Jackson Hole are never at a loss for lodging options. Choices include luxury hotels, bunkhouses, locally-run hotels, slopeside accommodations, condos, townhomes and more. The Teton Mountain Lodge and Spa is a AAA Four-Diamond Hotel, and Caldera House has eight sprawling suites—each one with a chef’s kitchen and multiple bedrooms. For more information about all there is to do and see at Jackson Hole, visit www.jacksonhole.com.

This glorious national park in northwestern Wyoming encompasses more than 300,000 acres of beautiful mountains, landscapes, and foliage. The park is set around the Teton Mountain Range—a range dotted with pointy and jagged mountainous peaks—each one more than 12,000 feet in elevation. The highest mountain is Grand Teton, which stands 13,770 feet above sea level. The park is home to more than 300 species of birds, 60 species of mammals and lots of freshwater fish. Popular activities in the park include hiking, climbing, photography, kayaking, fishing and sightseeing. To plan your trip to Grand Tetons National Park, visit www.nps.gov/grte. 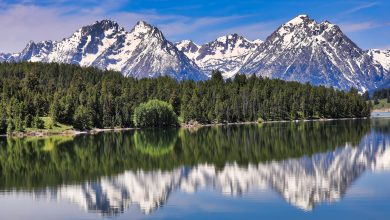 You’ll Be Humbled and Amazed by Wyoming 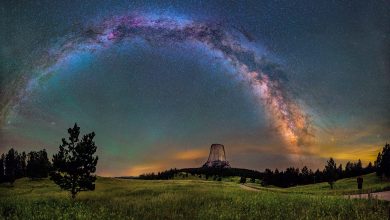