New Hampshire is a tiny, inconspicuous state in the Northeast United States. Although it is tiny, it is fierce. The state motto “Live Free or Die,” sums up the New Hampshire spirit. Known for not having a sales or income tax, this state also prides itself on having the first state constitution in the nation, the first national Thanksgiving, the first meeting of the Republican Party, the first US Navy Shipyard, and so many other accomplishments. Let’s not forget that Tupperware was invented in this state.

This beloved motto was coined by New Hampshire’s most celebrated soldier of the American Revolution: John Stark. He wrote these words in a toast at a reunion of one of the battles. He wrote: “Live free or die: Death is not the worst of evils.” The phrase stuck, and can now be found on every state quarter, emblem, and license plate.

A lot of truly important pieces of history took place in the Granite State. Not to mention all of the significant people who called New Hampshire home ranging from a US President to poets, actors to even an astronaut! All of these important locations and people are worth mentioning and learning a bit more about!

Anyone pay attention in high school history class? Who was the 14th President of the United States? That’s right, it was New Hampshire native Franklin Pierce! Pierce grew up in Hillsborough, NH in a house built by his father. The Homestead Historic Site is now open to the public for tours!

The USS Albacore singlehandedly changed the future of the US Navy. This incredible submarine was built for research and top secret testing that is now used in modern technology. Because of this ship, our Navy now has high-speed silent operation features. Incredibly important back then, this ship is now a museum open to the public in Portsmouth, New Hampshire!

Josiah Bartlett was a well-known physician and NH Representative in Kingston, New Hampshire. He also happened to be the second signer of the Declaration of Independence. Because of Bartlett’s importance, the house is on the U. S. National Historic Landmark and U. S. National Register of Historic Places lists.

This historically fascinating museum in Exeter, New Hampshire stored the state’s treasury during the American Revolution. There are some amazing treasures in this 18th-century site, like an original Dunlap Broadside of the Declaration of Independence and early drafts of the U.S. Constitution. There’s also a permanent collection of 18th-century artifacts. This stop is great for history buffs!

New Hampshire’s natural beauty is fantastic for creative inspiration. This was definitely true for Robert Frost! The beloved poet lived in Derry, New Hampshire for some of his life. Frost had such a lasting impact on American culture that we think this site is pretty important. At Frost Farm, guests can tour the house and learn about his life, and even hear some poetry readings!

Augustus Saint-Gaudens was one of the most prolific American sculptors of his time. He made some amazing contributions to the art and history world in America, including the Standing Lincoln monument and the Shaw Memorial. He also happened to live in Cornish, New Hampshire! The grounds of his home are now a museum and open to the public. Starting Memorial Day, guests can visit and learn about the great artist. Did you know Saint-Gaudens is one of the only two National Parks in New Hampshire?

It can be easy to get caught up in the bustle of life and of a big city, but there aren’t a lot of those in New Hampshire. Instead, this state likes to slow down and go back to being simple. In Portsmouth, visitors can practically step back in time at the Strawberry Banke Museum. This outdoor history museum sits on ten whole acres filled with domestic and commercial buildings, gardens, and educational opportunities with costumed actors. Here guests get to see how life was lived in that exact spot for 300 years in New Hampshire’s history.

Most people don’t even know about this hidden treasure right in Salem, New Hampshire! America’s Stonehenge is known as one of America’s oldest historic sites. The crazy thing about this site is that its origin is still a mystery.  Just like the Stonehenge in England, no one is totally sure how this Salem site came to be. Visitors can see and speculate for themselves by checking out the museum and one hundred acre grounds!

New Castle, New Hampshire was a busy place right before the Revolutionary War! It was in this little town that British Troops operated out of Fort Constitution: a little bunker for guns and power at the mouth of Piscataqua River. Paul Revere actually road to Portsmouth to warn colonists about the actions taking place at the fort. Today, visitors can check out the area for free and enjoy the beautiful lighthouse that now sits on the grounds.

Oh my. While there are many important sites and buildings and homes, we can’t forget the importance of the natural features around New Hampshire. It would be nearly impossible to write down every historically significant event that took place off the grid, from battles to agreements to the inspiration that comes from these places. 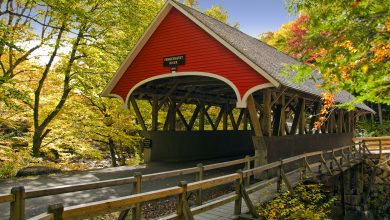 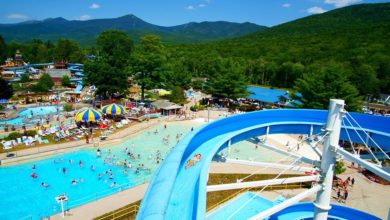