South Dakota is the home to many famous and iconic sights in this country. Many of these attractions are well-known across the world, while others hold significant historical importance to the locales. If you are looking to see the best of the state, you need to visit these iconic sights in South Dakota.

One of the most popular and iconic sights in the United States is the Mount Rushmore National Memorial. You can see why Mount Rushmore is the top tourist attraction in the state as it draws over three million visitors per year. Located near the Black Hills town of Keystone, this historic landmark celebrates the birth, growth, development, and preservation of the country. The faces of George Washington, Thomas Jefferson, Theodore Roosevelt, and Abraham Lincoln are carved into the granite face of Mount Rushmore. The projected started in 1927, and it finally finished in 1941. Initially, each president’s original depiction was from head to waist, but due to the lack of funding, only their heads were sculpted. Today, visitors from all over the country travel to visit this memorial in South Dakota. If you are planning on a visit, the summer months are some of the busiest of the year.

The rugged landscape of the Badlands National Park is another iconic spot in South Dakota. These natural rock formations spread out over 244,000 acres of land. Inside the park, you can see many of the peaks, gorges, and prairies that make this a unique spot in the state. The rock deposits are some of the most abundant fossil beds in the world. Many prehistoric animals have been found here, including the ancestor to the modern-day horse and the saber-tooth cat.

Today, many animals, such as bighorn sheep, bison, and prairie dogs, roam the prairies. For those exploring by car, you can travel down the Badlands Loop Road (also known as Highway 240) for an up-close look at the park. There are several lookouts for you to stop and marvel at the natural beauty. If you would travel on foot, near the Ben Reifel Visitor Center, you can explore one of the many trails. A can’t-miss spot includes the Fossil Exhibit Trail that features several displays of the various specimens uncovered in this National Park.

Mount Rushmore and the Badlands are all located in the Black Hills region of South Dakota. The Black Hills National Forest includes over 1.2 million of acres across the state. This Black Hills mountain range is so vast that it extends in the neighboring state of Wyoming. The area is a paradise for many outdoor enthusiasts, including mountain bikers who seek out adventure on the old logging trails and rugged terrains. The highest summit in the mountain range is Black Elk Peak at 7,244 feet, and it has become a haven for those wanting to trek to the top of the Black Hills.

While all the attention is on Mount Rushmore, there is another site that is important to the history and the native Lakota tribe of South Dakota. The largest mountain sculpture in the world is the Crazy Horse Memorial. Located near the town of Custer, the sculpture depicts Crazy Horse riding a horse and pointing into the horizon.

The statue is still incomplete, but once finished, it will be the second tallest monument in the world. In addition to the sculpture, there is a museum dedicated to the Native Americans and their history. All visitors are welcomed to learn about the life of this legendary leader.

Another National Natural Landmark and National Historic Landmark in the Black Hills is Bear Butte. Located near the town of Sturgis, Bear Butte is an important religious site for many of the Plains Indians before settlers reached the area. Many indigenous people still make a pilgrimage to the area to leave offerings on the mountain. These religious ceremonies take place throughout the year. Bear Butte is sacred to many people in South Dakota, and there has been an effort to preserve the land around the butte. In 1961, Bear Butte was officially named a State Park in South Dakota. You can travel to a campsite on Highway 79. Fishing, horseback riding, and boating are allowed in the area. There are even a few herds of buffalo that roam around the mountain’s base. You can explore the area from the summit trail. However, visitors are asked to respect the religious offerings and worshipers in the area.

Another iconic sight has nothing to do with nature, but rather manmade machinery. Near the Black Hills, Sturgis transforms each August when motorcyclists from around the world head to this tiny town. The Sturgis Motorcycle Rally is one of the most recognizable motorcycle events in the world. For two weeks in August, visitors can enjoy food and music during the fest. The first rally was held in 1938 when a group of Indian motorcycle riders decided to showcase their talents and race with other riders. Today, the festival is so large that the town’s population swells from 6,000 to 400,000 during the event.

You may have seen Wall Drug bumper stickers plastered on vehicles across the nation. This tourist attraction began operation during the Depression when they offered free water to weary travelers. The 76,000 square foot shopping center includes a gift shop, a drug store, and several restaurants. The spot is so popular that over two million people per year stop by this location. Today, Wall Drug still offers free ice water, and you can even see the signs advertising the store on the highways. Make sure to grab a donut in one of the restaurants, buy a pair of cowboy boots, or check out the roadside attractions, like the giant rabbit, in the front of the building. Wall Drug is close to the Badlands National Park so that you can check out two iconic spots in one trip. 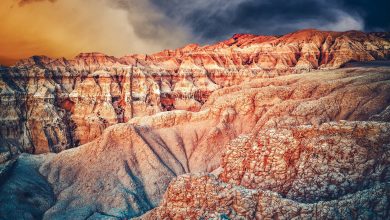 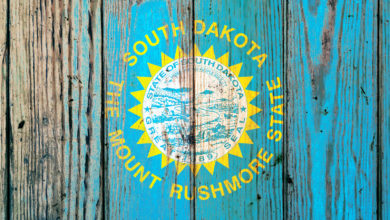 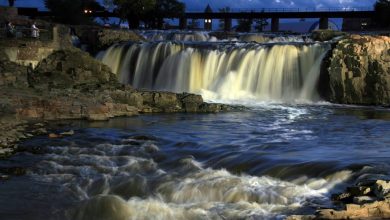 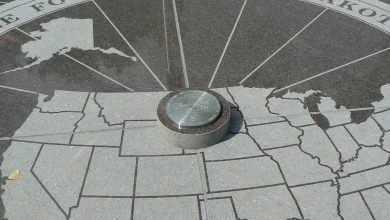