Georgia is a state that seems to have a little bit of everything. You’ll find a beautiful coastline along the Atlantic Ocean, but you can also visit the mountains. It is known as both the Peach State and also The Empire State of the South. The capital of Georgia is also the largest city in the state; Atlanta. Famous people from Georgia include singer James Brown, baseball player Ty Cobb, and Jimmy Carter, the 39th President of the United States. Georgia is known for peanuts, peaches, and the state song, which is Georgia on My Mind. Here are some things that you might not know about the fourth state.

While Georgia is in the middle of the pack (24th) as far as state size is concerned, that statistic is a bit misleading. Georgia is the largest state that is located to the east of the Mississippi River. Remember that the states that were settled earlier tend to be smaller than those to the west. As far as population, Georgia ranks number eight in the country. As of 2018, over ten and a half million people call Georgia home. The population is growing, 14 of the top 100 fastest growing counties in the United States are located within Georgia.

The Colony of Georgia was founded in 1733 by James Oglethorpe. His intention was that it would be a penal colony for those who could not pay their debts. This wasn’t to punish them, it was to give them a second chance. The Province of Georgia was one of the 13 original colonies. Button Gwinnett, Lyman Hall, and George Walton were the three men from Georgia who signed the Declaration of Independence. Less than 100 years later, Georgia joined the Confederacy and several major battles of the Civil War were fought within the state. In 1957 the Southern Christian Leadership Conference was formed in Atlanta. Its first President was Martin Luther King, Jr. The state was a staple of the Civil Rights Movement. In more recent history, the 1996 Summer Olympics were held in Atlanta.

Speaking of Atlanta, Georgia’s capital city and the surrounding areas are wonders in and of themselves. A good part of the city was burned during the Civil War, but you can’t tell that now. Atlanta is the 38th largest city in the country, at least population wise. It is home to several major league sports teams, including the Atlanta Braves (baseball), the Atlanta Falcons (football), and the Atlanta Hawks (basketball). It is also home to the Atlanta Motor Speedway. Atlanta is quickly becoming a cultural destination, and it is also a desired location for filming both movies and television shows.

One interesting fact about Atlanta is it has a lower than average rate of people who own cars. Over 15 percent of those who live in the city do not own one. That is because the Metropolitan Atlanta Rapid Transit Authority does a great job of helping people get to where they want to go. The city of Atlanta cannot be mentioned without saying something about Hartsfield–Jackson Atlanta International Airport. As far as passenger traffic is concerned, it is the busiest airport in the world. There are 40 international gates and 152 domestic gates. There are over 2,500 flights in or out of the airport each day. There is currently a 20-year plan in place for airport maintenance and expansion. One more interesting fact about Atlanta; the city was not always called Atlanta. Before Atlanta, it was called both Marthaville and Terminus. Atlanta has a better ring to it.

If you love the beach, then you will love what Georgia has to offer. The coastline is approximately 100 miles long. A good part of that is known as The Golden Isles. This is a group of barrier islands that include Jekyll Island, Sea Island, and St. Simon Island, among others. Tourism is a major industry along the coastline. Approximately 2.4 million vacationers visit each year. The Georgia beaches are desirable because Georgia is far enough south to have a long tourist season. The air temperature can be downright hot in the summer months, making the water feel even better. When visiting the Georgian coastline you will also want to stop by Brunswick. The town dates back to 1771! In the Brunswick Old Town Historic District, you can see buildings that date back well over 100 years. You will feel as if you have stepped back in time.

Georgia is a history buff’s dream come true, and that dream will not be complete without a visit to St. Marys. It is the second oldest city in the country. One of the best ways to learn about the city is to take the St. Marys History Walk. It is a self-guided tour that will take you back 500 years. You can go at your own pace. Once you’re done, enjoy the Cumberland Island National Seashore. You will not be disappointed.

The lowest point in Georgia is sea level. The highest is Brasstown Bald. It reaches 4,784 feet! That is not the only high peak that you will find in Georgia. There are 20 different summits that reach over 4,000 feet each. Within the state’s borders you will find parts of three different ranges; the Appalachian Mountains, the Blue Ridge Mountains, and the Cohutta Mountains. Because of the mountains, hiking and climbing are popular within the state. The southern trailhead of the Appalachian Trail can be found on Springer Mountain. Georgia has 75 miles of the famous trail.

Georgia is the leading manufacturer of paper products in the United States. It also leads in textiles and boards. If you love watermelon, you’ll want to visit Cordele, Georgia. It is known as the “Watermelon Capital of the World”. Another treat that can be surprisingly sweet is the Vidalia onion. They are grown in Vidalia and Glennville. While other areas of the country have tried to grow onions that are just as sweet, they have not been successful. Vidalia onions are the official vegetable of the state of Georgia. 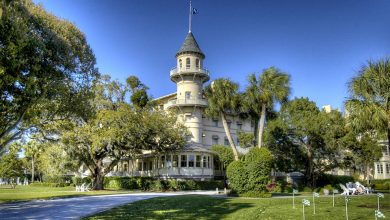 The Perfect Island Getaway in Georgia