Massachusetts has some of the best fall views in all of New England. Its fall foliage is famous – people flock to this part of the country to take in the beauty of the season. It’s hard to just choose one scenic trip to take, so I’ve divided this list up into eastern and western Mass because they’re both so different and equally wonderful!

A scenic trip along the eastern part of the state in the fall involves breathtaking after breathtaking views. For a spectacular scenic trip in Eastern Mass, I would start in Boston. Boston in the fall has a remarkable energy – especially if the Red Sox have just won. Take a walk around Boston Common, or lunch in Faneuil Hall, or simply grab a cannoli from Mike’s Pastry and hit the road. After that, just keep driving north.

Once you get out of the bustle of the city, the charm of the quiet seaside towns takes over and suddenly you’ll want to stop at every single one. Drive through Lynn to Marblehead where you’ll see sailboats and rocky shores on every corner. Marblehead is on the higher end of the already high-end North Shore. There are cozy cottages and quaint streets to meander.

But keep going and you’ll pass right through Salem, a town ready to be experienced. Salem, while charming and beautiful in its own right, is mostly known for its history and quirk. Heed this warning about traveling to Salem in October though: it will be crazy busy. As far as it being actually crazy, don’t stress too much. The witches are mostly gone. But there are some fantastically fun activities, shows, and opportunities during fall in Salem.

Thirsty? Better stop in at Atomic Café in Beverly for a pumpkin spice latte. Or better yet, a seasonal ice cream at Captain Dusty’s in Manchester-by-the-Sea. Also make sure to stop by this town’s local hangout: Singing Beach. Post-Labor Day it becomes a dog beach and it’s wonderful.

Further up the peninsula, you’ll find Rockport, which is at its charming peak at Christmastime, so make sure to go back, but it’s still super lovely in fall. Rockport is the perfect spot for those typical waterfront pictures. All the angles are perfect.

Next comes Essex. There’s nothing particularly “fall-like” about this town, but the cooler weather is perfect weather for antiquing! Antiquing is a very New England fall activity. And Essex is a fantastic town for it. Whole strips of streets are just antique shops – some as old as the artifacts they’re selling.

Finally on our little North Shore tour is Ipswich. There are not many things that Massachusetts natives – Mass-holes as we like to call ourselves – enjoy in fall more than apple picking. It’s kind of like a right of passage. Russell Orchards in Ipswich is the place to go. Russell Orchards is a massive, family-run farm where you can go to pick your own apples, pumpkins, feed animals, eat copious amounts of delicious cider donuts and more. It’s a North Shore fall season must.

Once you’ve had your fill of cider donuts and get back in your car, the next place north to go is New Hampshire. I highly recommend to keep driving. New Hampshire has amazing fall foliage too, but Massachusetts is still better….

Western Mass often gets forgotten in the excitement of Boston, but it’s still there! And it has a hard time hiding when the fall colors begin to peep. While the eastern part of the state has the beauty and serenity of the ocean, the western half gets the majesty of the mountains. There’s definitely less to do in Western Mass, but there are more mountains, more farms, more open space. And these simply beam in fall.

I would start a scenic tour of Western Mass in fall in Amherst, Mass. Amherst, a college farm town, is perfect for fall. To start this road trip day, you’re going to need to stock up on cider donuts (I really wasn’t kidding about the obsession before). Atkins Farm in Amherst is the place. For those who grew up here, you remember the TV ads on the morning news. For everyone else, this is a great stop for donuts, apples, and cider.

Maybe a hip detour? Northampton is ideal. It used to be known for its tremendous history in the western part of the state, but now it’s mostly known for its college town vibes and accepting atmosphere. In the fall, the college kids resurface in scarves and beanies, ready for a good time. If you’re looking for a longer break from driving, sneak into a booth in McLadden’s for a pint or a snack.

Once you’ve rested, hit the road for your next stop: Deerfield, home of Yankee Candle’s flagship store. Since it’s fall, it means Christmas is right around the corner. Yankee Candle is such a fun stop for early Christmas shopping, as it stays themed all year long.

Now that your car is loaded with yummy smelling gifts, you’re off to your final stop on this Western Mass fall trip: Stockbridge. Cue James Taylor. The drive through the Berkshires in fall is unlike anything else. Backwinding roads, open fields, towering mountains, all dotted in fiery waves. Your destination in this historic, cute town is the Red Lion Inn. During this season, the famous Inn has two record-breaking, massive pumpkins and cornstalks and orange and reds lining the walkway to the front door. Inside, the fire is roaring, a black and white cat is napping, and a hot apple toddy is calling your name. Personally, I would just stay here. But if you want to keep driving, New York State starts in the town over, and they have some beautiful fall views too.

Either way, it’s been a pretty amazing trip.

You'll Want to make Time for These Treasure Troves of Art, History and Science 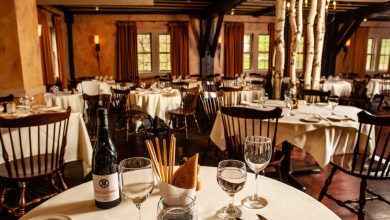