Two of the longest caves in the country can be found in the Mount Rushmore State, and believe it or not, you’ll find more miles of shoreline in South Dakota than in Florida! Surprised? Here are six more things that set South Dakota apart that might surprise you as well.

Four presidents are carved in stone.

Mount Rushmore National Monument—also called Presidents’ Mountain—is one of the most widely-recognized monuments in the country. The monument consists of the likenesses of four presidents—George Washington, Thomas Jefferson, Theodore Roosevelt and Abraham Lincoln—carved into the side of a mountain in the South Dakota Black Hills. Construction on the monument began in 1927 and was completed 14 years later in 1941.

The idea for the monument came from the mind of South Dakota Historian Doane Robinson. The sculptor for the project was Gutzon Borglum. Borglum and more than 400 workers sculpted the likenesses of the four presidents—each one 500 feet above the ground and 60 feet in height. Federal funding was approved for the project which only cost $1 million. Created to represent the first 130 years of our nation’s history, Mount Rushmore National Monument is South Dakota’s #1 tourist attraction, yielding the state more than 2 million visitors each year. For more information about the monument or to plan your visit, go to www.nps.gov/moru.

Actually, it’s not bad at all, but it’s centered around the famed South Dakota Badlands. The park encompasses about 244,000 acres of eroded buttes and pinnacles. Different formations resulted from different processes of deposition and erosion over time. The park also protects the largest undisturbed area of mixed-grass prairie in the country. Bison, bighorn sheep, prairie dogs, and other animals roam freely about the prairie. Badlands National Park also boasts one of the world’s richest fossil beds.

Visitors to the park enjoy outdoor activities like hiking, backcountry camping, bicycling, wildlife viewing, and photography. If you prefer cabins over campsites, you can reserve one at Cedar Pass Lodge. The lodge is open from April to October. Cedar Pass is located inside the park but is not operated by the National Park Service. For more information about Badlands National Park, visit www.nps.com/badl.

The one and only Corn Palace

You haven’t experience South Dakota until you’ve been to the “One and Only Corn Palace.” More than half a million people visit this unique multi-purpose facility each year. Established in 1892, the Corn Palace was initially built as a symbol of South Dakota’s healthy agricultural climate. Today, murals depicting agricultural themes are found all around the palace, and it’s used as a meeting place, a facility to host high school graduations and dances, as well as football games and other large group events. USA Today named the Corn Palace “one of the best places in the U.S. for high school football.” The Corn Palace also hosts music festivals, comedy shows and more.

Each year, the facility is redecorated in a different theme. Natural-colored corn, grains, and grasses are used to create scenes that are in keeping with the theme for that year. Ear by ear, corn is nailed up to create the scenes. Thirteen different colors (or shades of those colors) are used—red, brown, black, blue, white, orange, calico, yellow and green are some of the colors used as they are naturally occurring in the corn and grains. The decorating process begins in late May when the old murals are stripped down and the new ones are begun. The Corn Palace is considered a folk-art wonder in South Dakota. For more information, visit www.cornpalace.com.

Belle Fourche, South Dakota is the geographical center of the United States.

In 1959, after both Alaska and Hawaii became states, an area approximately 20 miles north of Belle Fourche, South Dakota, was designated the geographical center of the country. The spot is noted by an official marker and sheepherder’s monument called “Stone Johnnie.” The marker is a large stone compass with a map of the United States on it. The monument is surrounded by the flags of all 50 states.

A giant dinosaur once lived here.

In 1956, Raven Industries was founded in South Dakota. It was the first company on earth to produce hot air balloons that could reach high altitudes. Originally manufactured for use by the Office of Naval Research, the development paved the way for modern-day ballooning. 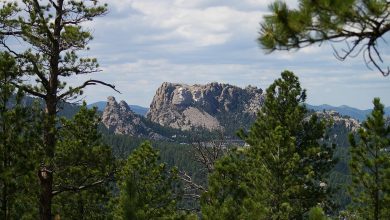 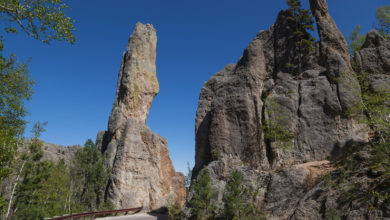 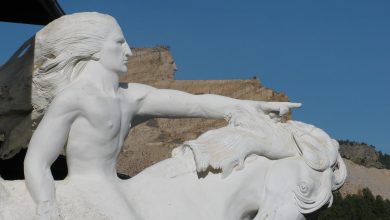 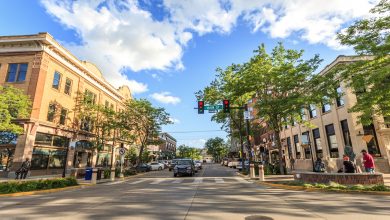