West Virginia has been called the place where “mountaineers are always free.” Almost two million people live in the Mountain State—not all of them mountaineers, however. More than 75% of the state is covered by forests, and there are so many waterways and rivers in West Virginia that if you’re driving down a road in the state, chances are that road is following one of those waterways. Olympic gymnast Mary Lou Retton, writer and Nobel prize winner Pearl S. Buck and country singer Brad Paisley were all born in West Virginia. Did you know that? Either way, there are several things about Virginia’s westerly cousin that you might not have known—try these on for size.

It has the most towns named for famous cities and countries.

Maybe they ran out of names for towns. Maybe they weren’t feeling uber creative when naming these towns. Or perhaps they wanted to honor the culture and heritage of other countries. We don’t know. What we do know is that when the meeting was held to determine names for towns in West Virginia, all anyone could come up with were the names of countries across the globe. In fact, the state has more towns with names of other countries than any other state in the union. You’ll find the towns of Athens, Berlin, Cairo, Calcutta, Geneva, Glasgow, Killarney, Lima, London, Moscow, Odessa, Ottawa, Palermo, Rangoon, Santiago, Vienna and Wellington in the state of West Virginia.

The Andy Griffith Show wouldn’t have been nearly as funny if it weren’t for West Virginia.

The Andy Griffith Show was a spin-off of The Danny Thomas Show and it was wildly successful. That success was due in part to a character in the series that supported Sheriff Andy Taylor, played by Andy Griffith. The scrawny and nerdy—but always lovable—Deputy Barney Fife provided much of the show’s comedic quality, and the man behind the character hailed from Morgantown, West Virginia. Jesse Donald Knotts was born in the summer of 1924, and he had his beginnings as a comedian long before the idea for The Andy Griffith Show was ever conceived. Don Knotts hated his given name, “Jesse,” and it was for this reason that his co-star and personal friend Andy Griffith called him “Jess” whenever possible.

The zany, wiry, often-too-serious Barney Fife was known for saying, “Nip it! Nip it in the bud!” and words like “compelshun,” “comicalness,” “therapetic” and “extra-sensitive perception.” Needless to say, The Andy Griffith Show would have had a much different tone without the silly antics and over-sensitivity of Deputy Barney Fife. So, thank you West Virginia.

West Virginians prefer that you leave your lion back at the house.

We know. We know it’s a disappointment. But if you’re walking along the street in the state of West Virginia, it’s against the law to have your lion, tiger or leopard with you—even if you’re classy enough to have them on a leash. In some places in West Virginia, you can be fined for whistling underwater, for snoozing on a train and even for leaving your home without knowing where you’re going. (Yes, these really are/were laws on the books in the Mountain State.) Incidences of public swearing can cost you a fine of $1 a throw. And one more thing—if you or someone you know is a member of the clergy, you should know that the state of West Virginia frowns on joke-telling and silly stories shared from the pulpit. So. There’s that.

The National Park Service has quite a presence around the state.

Much of the natural beauty of West Virginia is protected by the National Park Service. The Appalachian Trail—a National Scenic Trail over 2,100 miles long makes its way through many states—one being West Virginia. The Bluestone River in the southern Appalachians is protected as well. The Chesapeake and Ohio Canal National Historical Park preserves an important part of America’s early transportation history. The National Coal Heritage Area encompasses some 5,300 square miles in southern West Virginia and protects an area of the state with a rich history of coal deposits. The Gauley River National Recreation Area is yet another area protected by the National Park Service where the Gauley River makes its way through scenic gorges and valleys. For more information about all the parks and protected areas in West Virginia, visit www.nps.gov.

West Virginians are partial to moms.

At least we assume so. On May 10, 1908, the country’s very first observance of Mother’s Day took place at Andrews Church in the town of Grafton, West Virginia.

A secret hiding place remained a secret for 30 years.

The Greenbrier Resort is a stately grand hotel in the city of White Sulphur Springs, West Virginia. The resort encompasses 11,000 acres and boasts more than 700 rooms, over 30 suites, 9 restaurants, and 11 bars. The hotel was originally built in 1858. Interestingly enough, during World War II, the hotel was commandeered by the United States Army and turned into a 2,000-bed facility named Ashford General Hospital. The hospital closed in 1946, and the Greenbrier Hotel underwent a two-year renovation.

But perhaps the most interesting thing about this resort is that it sits atop a huge bunker. From 1959 to 1962, while the hotel was adding a new wing, a secret emergency relocation center was also being built underground. It was to house the entire Congress in the event of nuclear fallout. For thirty years the bunker was kept stocked with everything the lawmakers would need if they had to be brought to the bunker. But in 1992, Ted Gup of The Washington Post broke the story of the hidden bunker. As a result, the government decommissioned it. Today, the Greenbrier offers tours of a part of the bunker as one of the activities at the resort.

In 1977, West Virginia saw the completion of the New River Gorge Bridge—a steel arch bridge over 3,000 feet long in the city of Fayetteville. The bridge is the third-highest vehicular bridge in the United States with a roadway that stands 876 feet off the ground. What makes the bridge even more special is the yearly observance of “Bridge Day.” Every year on the third Saturday of October, the bridge is closed to automobile traffic and open only to pedestrians.

More than 100,000 people gather every year for the event—many of them spectators, many of them base jumpers. It’s the only day of the year when base jumping from the bridge is permitted. Others rappel down the side of the gorge on Bridge Day. Still others choose to bungee jump or parachute from the bridge. 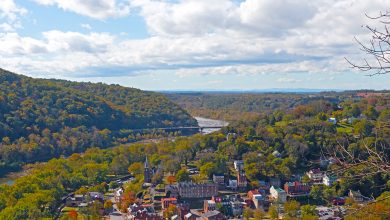 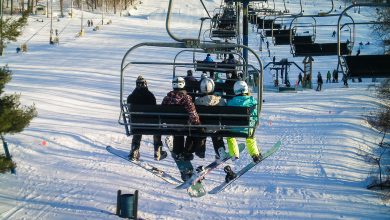 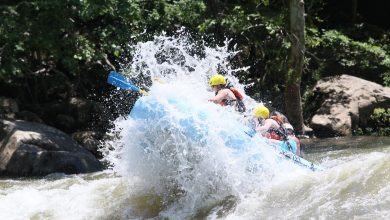