The state of Maryland was one of the country’s first states—on April 28, 1788, the Old Line State became the seventh to join the union. It’s the birthplace of the refrigerator and Nancy Pelosi, and in 1696, it was the first state in the country to have a school. Maryland is often referred to as “America in miniature,” and Marylanders’ pride in their country is second to none. Over six million people live in this state that celebrates jousting, lacrosse, Cal Ripken, Jr. and Ledo’s square-cut pizza. Sounds interesting, right? Well here are six more things about the Chesapeake State that might just tickle your fancy enough to start planning a Maryland getaway.

Feral horses confined to an island

There are two herds on the island that are separated by a fence at the state line between Maryland and Virginia. The horses on the island are smaller in stature than domesticated horses, and they have unique behaviors. They have adapted to be able to survive the extreme summer temperatures, droves of mosquitoes, inclement weather and the poor quality of food found on the island. For more information on the Assateague Island National Seashore, visit www.nps.gov/asis.

A fleet of ships left to their own demise

Mallows Bay lies just off the Potomac River in the town of Nanjemoy, Maryland. But visitors to the bay are often surprised by what they see. Instead of finding beachcombers, umbrellas, and fisherman at the bay, visitors to the area are in for a bit of a World War II-era history lesson.

When the United States entered World War II, there weren’t enough transport ships. To solve this problem, 1,000 wooden steamships were to be built in under 18 months. Steel was to be used only for battleships, and because of the rush to get the ships built, they were poorly made. By the time Germany surrendered to the Allied Forces, construction of the fleet was still not complete, and none of the ships had yet ventured across the ocean.

When the war was over, the fleet of 230 mighty ships was simply left to rot in Mallows Bay. Twenty years later, a clean-up effort was begun, but after studies and observations were conducted, it was learned that the vessels—being made of non-toxic wood—were hosting a unique ecosystem. It was decided that the never-used ships would stay in the bay until they someday rot away.

Ocean City, Maryland, is an Atlantic coast resort town. Only about 7,000 people live in the beach town, but more than 8 million people visit the resort annually. During the summer months, Ocean City becomes the second most populated area in the state, second only to Baltimore. Summer weekends see between 320,000 and 350,000 visitors to the sunny spot in Maryland. Tourists enjoy the three-mile-long boardwalk along the seafront, seasonal bonfires on the beach, concerts and more.

Ocean City is also home to a myriad of entertainment options aside from its pristine beaches. Families can enjoy the Jolly Roger Amusement Park, Splash Mountain Water Park and Ripley’s Believe It or Not! Trimper’s Rides is the country’s oldest single-family-run amusement park. Other choices include the Ocean Downs Casino and an interesting new venue called Selfie Fantasy.

Selfie Fantasy calls itself “Ocean City’s First Interactive Instagram-Worthy Experience.” At Selfie Fantasy, guests enjoy 6,000 square feet of props and backdrops with which they can take selfies perfect for that next Instagram post. The special lighting and surround sound music make this an even more immersive experience. For more information about this unique something-other-than-the-beach experience at Ocean City, visit www.selfiefantasy.com.

An attorney, a poem and bombs bursting in air

Many people are familiar with the name Francis Scott Key—the man behind the lyrics to the United States’ national anthem. But what you might not know is how events in Maryland in the 1800s inspired those lyrics and how the song became our country’s unifying anthem.

During the War of 1812, Key—who was born in Frederick, Maryland, in 1779—was witness to the British attack on Fort McHenry. The attack was waged all day long, but the fort couldn’t be defeated and withstood the entirety of the attacks. The next morning, Key noticed that the American flag was being flown proudly over Fort McHenry, and Key was moved by the whole experience, which served as the inspiration for a poem he wrote, entitled Defence of Ft. M’Henry. The poem was printed in newspapers like The Baltimore Patriot.

Later, the words from the poem were set to the tune of an old drinking song, called “To Anacreon in Heaven,” and the song was titled “The Star-Spangled Banner.” Key died in 1843, but the song lived on and remained an American musical symbol. It wasn’t until 1916 that President Woodrow Wilson declared that the song would be played at official events. On March 3, 1931, President Herbert Hoover, along with Congress, declared “The Star-Spangled Banner” our country’s national anthem—and it all began with a young man from Maryland.

Homage to the king of the macabre

You don’t have to be a literary scholar to have heard the name of the author of perhaps some of the most bizarre, macabre and dark literature of the early 1800s. Edgar Allen Poe was not born in Maryland, but by the way, in which he is celebrated in the state, you’d think he was.

Poe’s great-grandfather settled the Poe family in the Baltimore, Maryland area in 1755. Though Edgar Allen Poe was born in Boston, it was in Baltimore that he met his wife, published his second volume of poetry and even won a short story contest sponsored by The Baltimore Saturday Visitor. And the city celebrates his life and works and commemorates his death in several different ways.

On North Amity Street stands a small 2.5-story brick house with five bedrooms. Poe lived in the house with his aunt from 1832 to 1835. Today, it is referred to as Poe House and visitors can see the house and visit the museum adjacent to the house. There’s even a Poe-inspired restaurant located in Baltimore at the corner of South Clinton and Fleet Streets. It’s called the Annabel Lee Tavern—after Poe’s 1849 work, titled Annabel Lee. Ravens decorate the outside of the building—a reference to one of Poe’s most infamous works. The menu is hand-written, as were Poe’s works before publication. Guests are invited to eat dinner while enjoying readings of Poe’s works by narrators dressed in period-appropriate garments. Each year in January, the restaurant holds a celebration of Poe’s birthday, complete with a birthday cake for the late American author. 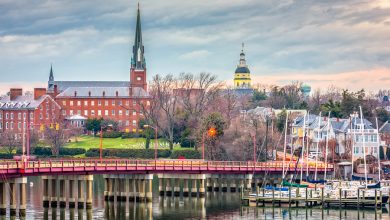 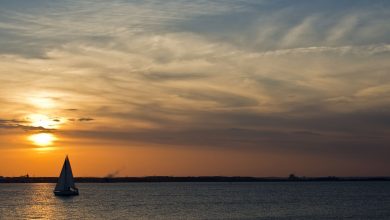